Zoook is e-commerce OpenERP App without connector, is developed in Python with Django framework, and is 100% compatible and designed to work with OpenERP.

Zoook e-Sale was originally developed by Zikzakmedia, and currently is unmaintained. This is an unofficial fork developed by Enterprise Objects Consulting, fully functional, with active development, free and open source, and with commercial support too.

The original project of ZZ works with OpenERP version 6.0, and does not come with all the source code. When we started the project more than a year ago, we complete all the missing code, fix and improve a lot of features, and make it work with the latest version at this time, so we migrated the modules and the dependencies to the version 6.1, and also moved the Django code to version 1.4.

First we pushed all the code in a Github fork, but now all the sources was moved to Launchpad to align with the OpenERP practices, and we published the modules in OpenERP Apps.

Today is an ecommerce fully functional and stable. It is still an e-commerce system very small compared with other systems such as Magento or Prestashop, but that's what makes great Zoook: it's extremely easy for OpenERP developers to implement and extend it, as it's written in the same language, has an extremely compact code, and executes all business operations directly in OpenERP via webservices.

It's not only a shopping cart system, can be used as developement framework to construct any web application integrated with OpenERP.

I was working these weeks in the new site where all the code reside, the installation guide, and also I created a repository with all dependencies of third party modules. The project are in https://launchpad.net/zoook-esale.

I hope collaborators will join to the project, a lot of improvements still to be done. And maybe the main task is migrate the modules to latest OpenERP, now the version 7.0. 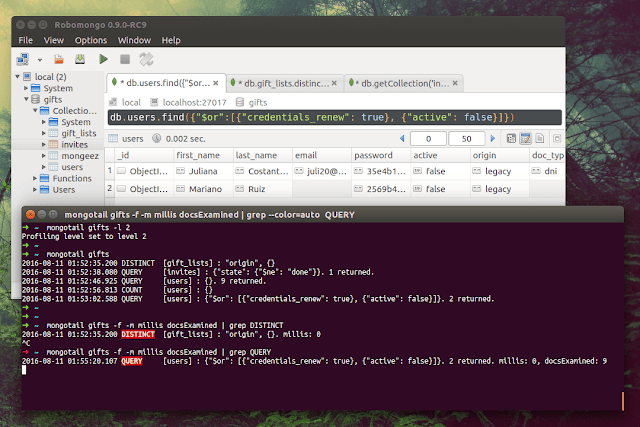 A couple of weeks ago I released Mongotail 2.0.0 , with new features and support for the latest version of MongoDB 3.2 . Also one of the most important features is the ability to login against a database with SSL authentication , and new options that give us more information about what is happening in our database, like the consumed time by a query, or how many registries the engine had to "walk" to find a particular record. What is Mongotail? mongotail is a command line tool to output any operation from a Mongo database in the standard output. You can see the operations collected by the database profiler from your console. In the following steps we will see how to use these new features, and at the end of the post are the instructions to update or install the tool. Activating the profiler of a database You need to activate the profiler of a database to see what is happening. In the following steps we will assume that we are connecting against a database ca
Leer más

noviembre 05, 2014
Some times, for a particular reason you need to perform a SQL query instead of execute a Grails/GORM operation . In these cases you can do the job writing a method in your domain models, or in your service classes like the following example: class MyService { def sessionFactory int myCustomOperation() { def session = sessionFactory.openSession() def sql = session.createSQLQuery( "SELECT field1 FROM ...MY CRAZY QUERY ... LIMIT 1") sql.uniqueResult().intValue() } } As you can seen, a new database session will open each time the function will call, so if the method is massively called by the application, it's possible that after the 30 th or more calls, a timeout exception will rise, because the BBDD engine doesn't have more connections to give to our application. A possible solution can be replace the openSession() call by a getCurrentSession() call, I have tried it, but the result is a new exception given the concurrent operations performed: hibe
Leer más